After a week of frantic searching, glorious but impeding sunsets, and scouring every weather and atmospheric resource imaginable, the conditions were right and I finally was able to see Comet NEOWISE in the skies above Everglades National Park. I don’t think I’ve ever experienced anything quite like this. Seeing a natural phenomenon that only occurs once every 6800 years and setting eyes on an object that is hurtling through space is deeply humbling for both the amazing scientific phenomenon taking place and the abject spirituality of nature and the cosmos.

Comet NEOWISE was discovered on March 27th 2020, and as of July, is reaching its perihelion, or its closest approach to the sun, resulting in it being visible on Earth. Comets are part of our solar system; they are orbiting the sun but usually on a very elliptical and large orbit. That a comet is visible through the atmosphere as it visits the space around Earth is a rarity. Barely visible to the naked eye, unless in abject darkness, a telescope, binoculars, or a camera are the best ways of getting to see the comet. The comet appears as a dim white triangular smudge, far dimmer than any of the surrounding planets and stars. The triangular shape of the comet can be attributed to the tail of the comet. NEOWISE is comprised of ice and as that ice comes closer and closer to the warmth of the sun, it begins shedding material in the form of outgassing, resulting in the comet’s tail. NEOWISE is reported to have sodium and ion tails making it much easier to see. The nucleus, or center of the comet, where this tail comes from, has a diameter of about 3 miles wide.

Before we were able to scientifically discern what comets are, humanity has always struggled to make sense of what these celestial visitors are. Western civilization has viewed comments as harbingers of doom and signs that the world is changing for the worst. In 1910, Halley’s Comet caused mass hysteria that the gas in the tail would poison the Earth. Both Ancient Chinese and Norse mythologies connected comets to the presence of heavenly beings fighting, dying, and creating the terrestrial world. In Ancient Greece, Pliny the Elder thought that comets were tied to political unrest and death. How appropriate and eerie for pessimists in 2020.

But for me? Armed with my basic scientific understanding of astronomy and what I hope is a healthy dose of appreciation for nature and its ability to inspire awe? Seeing Comet NEOWISE was humbling; a marker of this odd moment in time, where the cosmos lined up in a way to display a rare treasure in the sky. Seeing a dim light in a sea of vast and overwhelming darkness is a moment of hope and clarity and I think we could all use that right now. 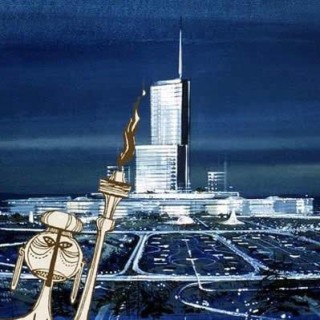 An EPCOT-inspired perspective on the world. Opinions, history, and news on topics ranging from the sublimity of National Parks and the theme park design theories governing Disneyland to midcentury Tiki Culture and the retro-futurism of World's Fairs. Expect minutia!